Skip to main content
Home Reform of the Mental Health Act must not be a missed opportunity, mental health and race experts demand

Reform of the Mental Health Act must not be a missed opportunity, mental health and race experts demand 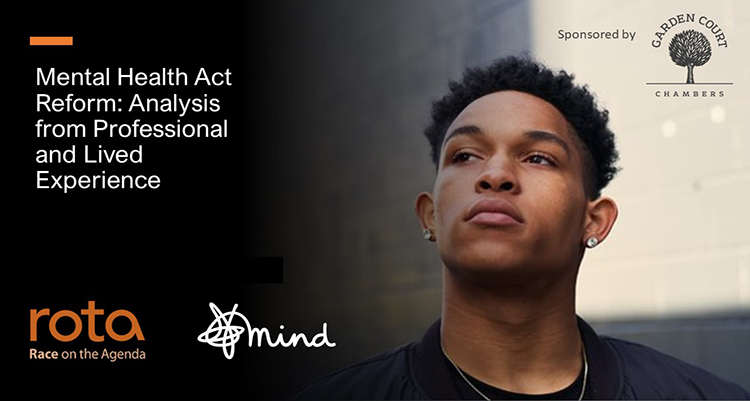 Reform of the Mental Health Act should see an end to structural racism within mental health services but the Government plans are found wanting.

On March 9th an on-line conference organised by Mind and Race on the Agenda and sponsored by Garden Court Chambers explored the urgent need for Mental Health Act reform and how to achieve racial equity within mental health services.

The conference was attended by nearly 200 and heard from people with their own experience of mental health problems who have spent time in hospital while sectioned under the Mental Health Act during the pandemic.

The conference was chaired by Maurice McLeod, Chief Executive of Race on the Agenda and Rheian Davies, Head of Legal at Mental Health Charity Mind

Also in attendance were:

More than three years have passed since the Independent Review of the Mental Health Act, which made a series of recommendations to the UK Government to overhaul outdated legislation which allows people with mental health problems to be held against their will (‘sectioned’) in certain circumstances.

Mind and Race on the Agenda are making the case for what is needed in terms of Mental Health Act reform:

Rheian Davies, Head of Legal at Mental Health Charity Mind said: “Structural racism continues to pervade the Mental Health Act. Black and Black British people are still far more likely to be detained under the Act, restrained against their will, and are more likely to be re-admitted to hospital without getting the right support.

To see racial equity within mental health services there must be a heightened commitment to antiracism, which addresses systemic biases in how people are treated and challenges institutional racism head-on.”

Marcia Rigg said: "They keep saying lessons have been learned but the only lessons they've learned is how to get away with it killing black men."

Maurice McLeod, Chief Executive of Race on the Agenda said: “There was a lot of energy at the conference because inequality in mental health care is such an important issue. There were lots of people with lived experience of the system, as service users, carers, or mental health practitioners. This meant a wide range of different opinions were expressed. But the agreement (which was quite noticeable) was that things are bad and are likely to be made worse, or at least not improved, by this new Act.

Along with Mind, ROTA will continue to work for a mental health care system based on value and respect for all and which is accessible to those who need support.”

If you would like to interview Maurice McLeod, please contact communications officer Lee Pinkerton at lee@rota.org.uk or on 07985 446 280

About Race on the Agenda:
ROTA is a social policy research organisation that focuses on issues impacting on Black, Asian and Minority Ethnic communities. Our policy priorities are mental health, education and criminal justice.
As a BAME-led organisation, all ROTA’s work is based on the principle that those with direct experience of inequality should be central to solutions to address it. Our work is actively informed by the lived experiences of BAME communities and their organisations.

•For information and support on staying mentally healthy at this time, visit